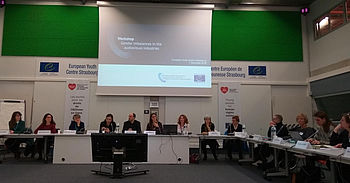 A seminar entitled ‘Gender Imbalances in the Audiovisual Industries’, organised by the European Audiovisual Observatory, was held on 7 December 2018 at the European Youth Centre in Strasbourg. The seminar was divided into four sessions covering various issues. The first session was devoted to European policy on promoting gender equality in the audiovisual industries and featured presentations about projects aimed at increasing public awareness and achieving parity, while the second session discussed this issue in relation to film crews. The representation of female characters on screen was the subject of the third session. The fourth session involved a practical game in which the participants tried to come up with answers to questions about the steps that the four major industry forces – the creative community, institutions, media regulators and civil society – should take in order to improve the current situation. Xenia Leontyeva, Senior Analyst at Nevafilm Research, played a key role in the event as moderator of the civil society working group. She also presented the results of the group’s brainstorming exercise during the closing session. One of the interesting conclusions the group reached was that, when civil society is unable to take direct action on a problem, there is usually something else it can do to help tackle it. For example, civil society may not be able to make decisions about which projects get financed by ministries of culture, but this can be countered by crowdfunding. Society itself may not adopt laws, but it can attract the attention of lawmakers to the problem of gender inequality and demand that it be addressed.

This year, Nevafilm was the first to discuss the representation of women in key positions in Russian film crews as part of its report entitled ‘Key Trends in Russian Cinema’ for the European Audiovisual Observatory.